Get fresh music recommendations delivered to your inbox every Friday.

by The History & Civilization of the Great Black Swamp 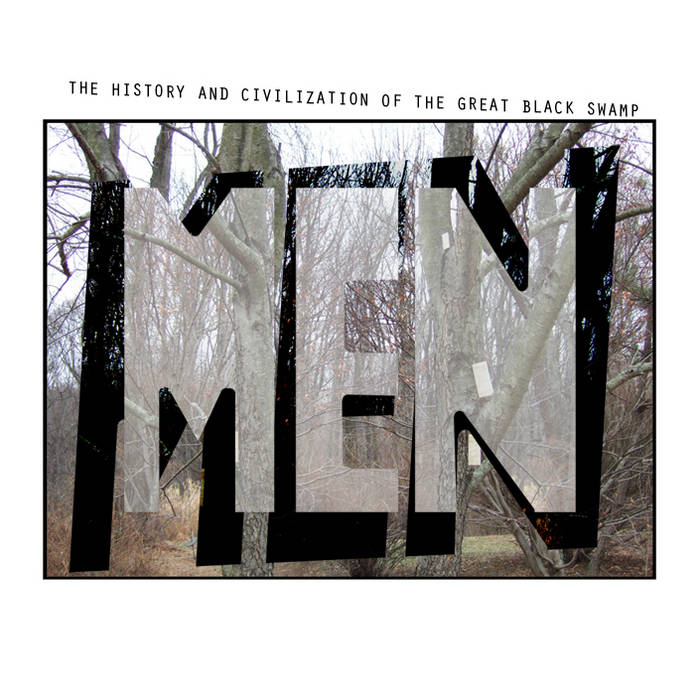 PREFACE: Tacitly related anecdotes, insights, insults and plebiscites as companions to this "recorded" piece of sound "entertainment" by Neil Barbour

On a gray Thursday last week, my bike and I traversed the few blocks that separate us from the oceanfront. We make this trip often, the two of us, to stare out onto the waves and to race around all the interesting parking structures waiting for the summer tourists.

"My life is becoming a waste of time," I sulk while I zing down a concrete bevelment. Whee! "But, oh, the only noble and worthwhile things on this earth don't earn anyone a decent wage," I lament as I thrust up the handlebars to ease my passing back onto Chestnut Street. Woo-hoo!

My presumptuous sense of history and present, respectively, is not so much a helpful fiction as it is an embarrassingly simple doll house tableau made for my entertainment. My sense of history is a small room with a few pieces of furniture and an empty shell of an upright half-ape, half-man that I position at will. Sit here, fictional ancestor, and perform the natural act of expression. Kneel there, crouched to breathe in the earth's sulfurs, Abraham, and perform selfless acts of art to inflict yourself on the ages.

But pardon me if the tableaus filed in this passably "human" record, "Men," which I hope you might have even started listening to in sequential order, don't inspire what feels so much like human nature – like a helpful sense of our beginnings. This is the story of the of men who beat, berate, befriend, bemuse and best one another for the sake of killing time and finding self.

Consider your life as the narrative, the history, you design as a definition of self. Then, consider the many moments you're clearly not in step with the usual tone and pacing with which your overall narrative tends to flow. Then, catch yourself noticing the absence of your essence in these metaphysical moments of benighted vanity and worthlessness.

What does your head feel like in a bucket of eels? Ask a silly question. Whoop, whoop!

Now, imagine yourself as one of the many characters featured in this "music" album, which perhaps you are already into song 2 or 3 of. Really absorb yourself into their aims, their arms, their ambitions and their alms. Feel a little silly? Now, list for yourself the three things you hope to get done tomorrow, the next few years, the rest of your life. Have I forgotten how to talk?

There are moments of Men that insist that essence and absence of self belong not just near one another, but perhaps they're of the same moment. Arthur's silly voices and doppelgangers aren't just a good time, they're also really unsettling.

Ed Grain's horrifying, senseless kidnapping and the insistence that he live under the sea start to unravel in the song's second division. The organ and vocals dissociate, some guitar plucking finds itself in the middle of the mix -- as confused with itself as you are of it. Has Arthur's out-of-body experience scared even himself? And the senselessness starts to solidify. Behold! His story!

"I'm in danger of becoming as boring and forgetful as I always accused my parents of being," I mutter in my hands not to, but at, my friend. I'm driving him on the day of his minor surgery to remove a small cancer. It's grown somewhere near his earlobe and hasn't spread. But I'm very hung-over and very weepy in the way that I like to pretend I'm not. That evening I spend 10 dollars trying to win Aaron's Party out of an arcade crane game.

I have no idea who I am. Pa-tang, squeal!

And what of John Gravy's philo-political (the worst clash of irrealities I can think of) nightmare of being reduced, literally, into the musty ennui that squeezes itself between discovering and losing oneself in moments between being oneself. Not really understanding the proper division of these realities becomes a sort of call to arms for these realities to co-exist. Or, stop trying so hard!

And, oh, what of the friends I've left behind and the ones I'll never make? They'll never require anything of me but a scant memory of my awkward dealings that interrupt their own self-aware sense on inadequacy and guilt. How wude!

That's not even really touching on the truly infectious moments on this record. "Jeff Drama" reeks of the pot-soaked early '90s of Evan Dando, but, you know, a lot funnier. And fuck "Rainbow Connection." Nobody casts a bitter Muppet aside better than Dan J. This record is a rowboat fashioned with 40 horses of PA system and enough rusty nails and rotting plywood to build all the dead-end planks and pagan love Chilton. See what I did there?

Violence, vertigo and vision quests notwithstanding, there's not much to do on my bike or on the boat. Or, better for the both of us, perhaps you're 5 or 6 songs into this "audible" recording, in which case, you should start over and really listen, man.

Otherwise, how will you know when it's appropriate to be you and when your sniveling, miniscule concept of appropriateness has become a needless apposition? Woo-hoo!

All lyrics and vocals by Arthur Bond, except:


All music written by Dan Jircitano, except:

music on 04 by Paul Williams.
music on 11 co-written by April Brennan.


Arthur Bond plays the drums, the harmonica, and most of the organ parts.

Dan Jircitano plays the acoustic and electric guitar, the ukelele, the mandolin, the danjo, and the other organ parts.


Dan and April's parts were recorded in Dan's home in North East, PA.

Arthur's were recorded in his bedroom in Baltimore, MD.

At no point did Arthur and Dan play the songs together in person.

Contact The History & Civilization of the Great Black Swamp